Owned by BlueMilkmäuse
Bred by Unknown
View Previous Packs
This wolf is currently on a breeding cool down. She will be able to fall pregnant again in 9 rollovers! 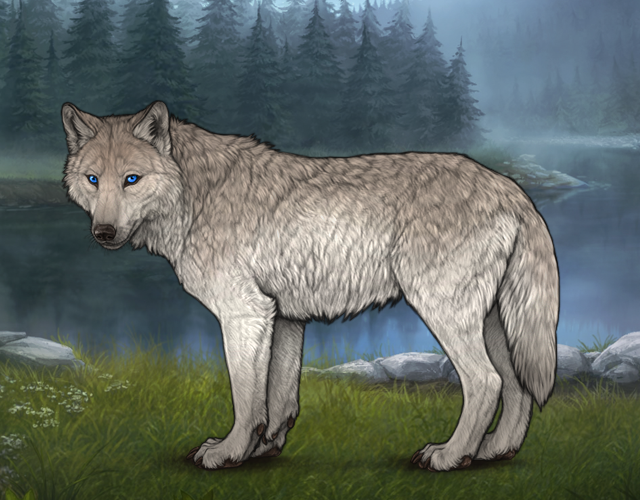 All her life , Ilmenite had lived with her parents, Indigo and Thunder. Not in a clan or pack, just them. They told her many stories of their old pack, a ''dismal enviroment that discourages critical thinking'' ; thats how her mother always described it. When she was a pup, she constantly asked about why the weather changed. Thunder asked her parents, her siblings, her elders but no matter who she asked, they all said that She made it happen. Being unsatisfied with the answer, she went out in a storm one night to examine the sky! Ilmenite's eyes widened in disbelief the first time she heard that story. ''That happened?'' Ilmenite asked. ''Yeah, our leader decided that she couldnt take food from the prey pile that evening. It didnt stop me from sharing my rabbit with her'' commented her father. He always watched the stars when he was in the pack. The other wolves thought he was very spiritual since to them, every star was a soul with no body. "They genuinely thought I had a gift until- her father stopped to giggle. "until I told them that I liked how the shiny stars contrasted the dark sky!" Her parent's thirst for knoledge about why the sky changed and what came after it meant that she had a destiny. (Though her parents never believed in the concept of destiny) "I'll make a clan and figure out the mysteries of the sky!" she said with fire in her eyes. "Ilmenite, you dont have to do such a thing, we arent making you" said her mother. "I really want to though, I'll find the answers and we'll finally know'' "You know what? You go do that, Im too old to come with you" Ilmenite knew that Thunder was desperate for hope since Indigo died a moon ago. They cuddled up together that night and in the morning, Ilmenite left for her journey.