Owned by Wasp
Bred by Unknown
View Previous Packs
This wolf is currently on a breeding cool down. She will be able to fall pregnant again in 2 rollovers!
This wolf has not rolled over today and will not be able to be traded or gifted until its next rollover. 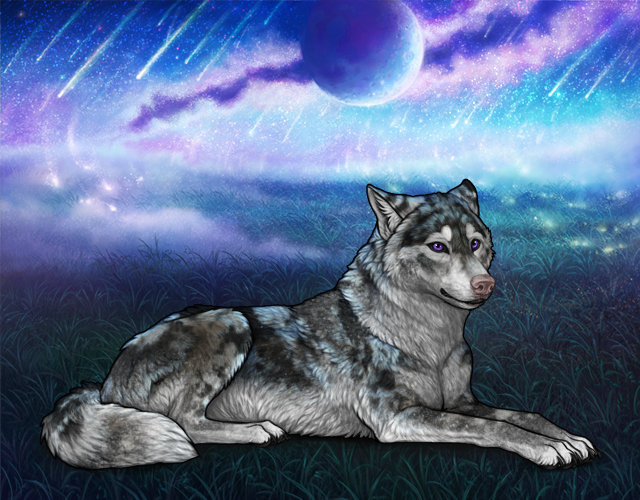 You enter a cave illuminated with glowing blue worms of sorts. The harsh sunlight finally dulled away as you walked further and further down. Eventually, you reach a curtain of glowing vines, which are flowering and releasing familiar glowing spores native to the Dreamlands. Certainly this pack must be connected with the lunar realm. Nosing through the curtain, you find a caped wolf seemingly waiting for you to enter. "Hello! How may I help you, my dear friend?"


Serene Skies originated from another pack. Nobody knew from where exactly she came, however, her clever and secluded nature eventually brought her to the Trading Center, where she was immediately spotted by the previous queen Blossoming Falls. Once taken in by the clan, she showed to be a wonderful member, spending plenty of time with the younger members and teaching everyone of what she'd learned from her time alone in the vast wilderness.
Not long after joining the clan, the great famine struck, leaving the few surviving wolves torn with confusion and fear. Blossoming Falls passed on to rest in the ancient dynasties near the end of the famine, leaving her crown to Serene Skies. Seeing the desperation and pain her packmates were in, she worked tirelessly to create new hunting parties and occasionally went off to find food herself. Because of her perseverance, Serene Skies managed to save her pack single-pawed. She will always be remembered, not only from the title she gained.