Owned by CircleE
Bred by Unknown
View Previous Packs
This wolf is currently nursing at least one puppy! She will wean her offspring in 5 rollovers! 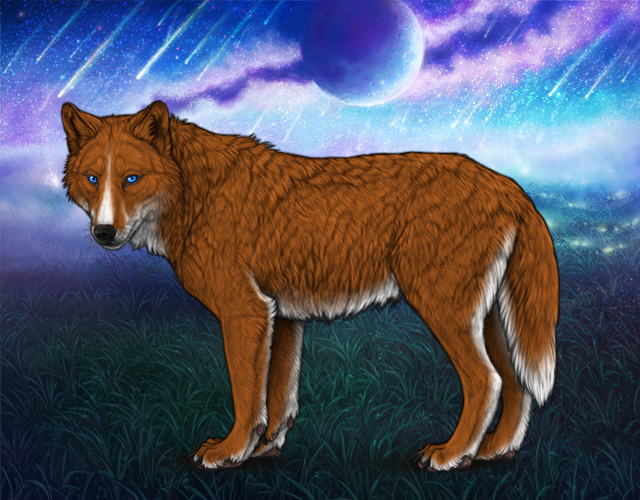 Red Rose woke in the middle of the night to the scariest sound she had ever heard in her life. The sound of the Eastern Wolves howling and their thundering footsteps drawing closer. She jumped up, instantly awake and on alert. She looked around as the wolves from her parents' pack also jumped to their feet.

Red Rose was a one year old red and white wolf who was still with her parents' pack, as was her two brothers and two sisters. She hadn't seen any reason to leave the pack and venture out on her own just yet, until now.

As the Eastern Wolves drew closer and closer, Red Rose gathered with her parents, siblings and the others in their pack, ready to defend their territory and themselves. The Eastern Wolves were the most vicious and aggressive pack nearby. They had almost had several encounters with them before, but thankfully, they had been spared. But not this time.

Red Rose's hackles raised and her teeth bared as she seen the first wolf come through the trees and in their sight. Here we go She thought to herself. Then before she knew what had happened, she was slammed to the ground in a painful body slam. She looked up just in time to see the female wolf, that had tackled her, lunging for her throat. Red Rose snapped at the she wolf, grabbing her by the ear and ripping it. She wasn't going to go that easy.

Twisting and snapping at the wolf, she finally broke lose. She spun around and latched onto the neck of the female wolf. Red Rose was known for her strong grip and she didn't let lose this time. This was to save her pack and she was determined to save them.

The wolf finally fell limp to the ground and Red Rose spun to look at what was happening around her. She couldn't believe her eyes and her heart sank. She seen both her parents, all of her siblings and most of her pack, on the ground, motionless. No, this can't be happening. She didn't want to believe that her family and pack were gone.

She was lost in the grief that suddenly overtook her, but snapped out of it as she felt a sharp pain on her back. She yelped in pain and tried to shake the male wolf that had latched on to her. She spun and spun until she was almost dizzy, but right before she was about to collapse, the male wolf fell off. She shook off the pain and strengthened her stance, hoping to cower him. That didn't work.

The male wolf growled and lunged towards her. He wasn't backing down. Red Rose growled back and snapped, latching onto his neck. She had a good grip but the male, who was stronger than her by far, just shook her off like she was a rag doll. Red Rose knew she wasn't going to win this fight. The male wolf sound faster than lightening and grabbed her, this time tightening his hold. Rose yelped in pain. She thought this was the end but then a strong determination flowed through her veins. She wasn't going to let the Eastern Wolves win this fight. They may have killed her family and pack, but she wouldn't let them kill her too. She was going to survive and carry on her family's legacy.

Tightening her muscles, Red Rose somehow managed to free herself from the wolfs grip. How she did, she would never know. Everything was such a blur at this point. She knew she was to weak to fight this pack by herself, so her only option to survive was to flee. Giving them one last growl and snap, she spun before any of them could react. She picked up her paws and started to run, leaving the only place she had ever know as home.

Red Rose heard the footsteps behind her as the Eastern Wolves pack gave chase. She knew if she was to survive, she would have to pick up her pace. Just them, she stumbled and almost hit the ground, but she regained her footing quickly and picked up her pace. She ran as fast as she could, her heart racing and her breath coming out in pants.

She ran till she had no more energy. She stopped momentarily, her ears pricked, listening. She didn't hear the enemy pack behind her anymore. Maybe she had lost them. She could only hope that she did. She started walking slowly, searching for a safe place to rest for the night. She finally found a small cave that looked abandoned in the hillside. Approaching it carefully, she sniffed and listened. She didn't detect any danger. She went to the farthest corner of the cave and settled down, curling up in a tight ball. She yelped slightly as her wounds started to ache and burn more. She had bite marks and various cuts across her back and side, but nothing life threatening. She slowly drifted off to sleep, thinking about her family and pack that had died, defending their territory.

Red Rose awoke the next morning, refreshed but still sore from her battle with the Eastern Wolves the night before. She still grieved from her loss but knew she had to continue to move on. She walked out of the cave and decided to go explore, albeit a bit cautiously. She had never been to these woods before and didn't know what lurked through them.

As she travelled, she spotted different animals, such as deer and elk and tiny little critters like chipmunks and many different birds. From time to time she'd catch the scent of either wolves or coyotes and decided to avoid them the best she could. She wasn't in the best of shape to take on them anyways.

Looking around and letting her guard down just a bit, she suddenly came to a halt when she bumped into something. She looked up and came nose to nose with another wolf. A male wolf at that. She shrank back just a bit, the memories from the male wolf attack from the night before rushing back. She didn't want to fight and hoped this wolf wouldn't try to either.

The male wolf sat back on his haunches and cocked his head slightly, looking at her. She looked at him cautiously, studying him. He was a solid white wolf, except for the black mask across his eyes and the black tip on his tail. She looked at his eyes and seen nothing but kindness and curiosity. She hoped that meant he meant her no harm.

She perked her ears a bit, waiting for him to make the first move. She wasn't going to let down her guard just yet. The male wolf dipped his head a bit. "My name is Bandit. I mean you no harm." He looked at her wounds. "You seem hurt. Can I help in any way?" He looked at her again and gave a slight smile.

Red Rose instantly knew that he was a good and kind wolf. She also knew that she would need someone to help her. She couldn't hunt in this condition. She needed to get well before she could try and take down a deer or an elk. She smiled and dipped her head as well. "Hi Bandit. I'm Red Rose." She nodded slightly. "I could use some help most definitely."

This is where it started, the CircleE pack. Red Rose and Bandit became mates and started their own pack. They had two pups, Cody and Kate. From there, the pack started to grow and Red Rose became a great leader. She hoped one day, either one of her pups, or another pup from the pack, would become a great leader and continue on the pack and help it grow.