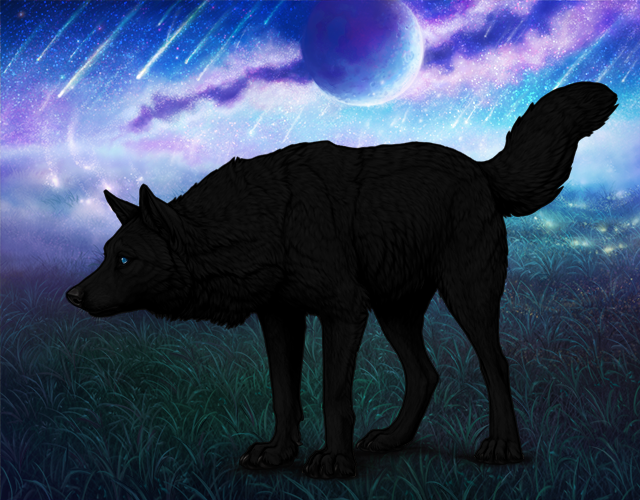 Two Starborn, wandering the inbetween. Alone, as all Starborn begin. Bidden by the Moon, lit from inside with a cold burst of starlight, a conjunction of air and earth and red flesh-water. They fought to survive, as all Starborn do. And they endured. Many rabbits and rivals were stilled by their teeth. Scratching glyphs in the soil dyed red, they howled to the Moon. Join us, they called. Bring us a worthy challenger. Years passed. For nearly half their lives they wandered, until competitors learned to seal their fangs away and dip their tails in recognition. The stars flickered, impassive.

On days when the clouds parted, and the Sun dappled their aspenbark pelts - they stirred. Gently touched by the Sun's warmth, not rejecting of it, but never quite acquiescing. No amount of claw-sharpening and teeth-gnashing quieted their spirits, as it had in the past. Uneasily, they closed their eyes again until the sun was nearly overtaken by the Earth. When they could face it in the west without being blinded. It reached out to them. They howled back. Not quite rivals and not quite friends, others began inviting them near their dens. Their usual, comforting reactions of puffed fur, knotted brows, and low growls were absent, there. Strange pups, strange smells, strange ways. They did not stay long. The sun shone, impassive.

As the Moon had created them and the Sun had guided them, they were pulled together. They had seen each other before, certainly, and with bared teeth and raised hackles sized each other up from afar. They were evenly matched and couldn't afford to risk a crippling injury. Their territories abutted, and they seemed to frequent that border more often than most.
Then, one bright summer day, their paths crossed under unusual circumstances. A storm was quickly approaching. The wind whipped, the clouds rolled, their hair seemed to stand on end of its own volition. The air was tense, as if encouraging them to battle, to finally see who is better. They drew close, the lunged, and instantaneously, rain poured down and lightning crashed between them. One was flung back, blinded and burnt. The other drew near, ready to finish the job... But couldn't. It wasn't right. It wasn't just. The victory would not be through skill but through luck, which is not a victory st all.
Standing over the dazed and defenseless wolf, the one who was able sunk their teeth into the scruff of the other's neck and dragged them to a nearby cave. There, they weathered out the storm, slipping in and out of consciousness. The rain and the clouds passed just in time to see the Sun winking at them from just above the horizon. They found they could let their guard down, now.

Guided by the Sun, the pair found a pack in a time of transition. Maybe... It was time to stay. They needn't prove themselves any more. They were welcomed, guided by each other's company, finding it strange and comforting that these other wolves were not a threat. Besides, the old hunters knew their time was drawing to a close. Attention was turned to the next generation.
The lead, ever the opportunist, saw in them a way to use their experience to benefit the whole. At first, they were scouts, a balance between solitude and companionship. Wanderers with a den to return to. They learned to bring gifts back to their packmates. They were appreciated. The feeling of power obtained from displays of intimidation and battles won was replicated through smiles and nuzzles. Yet they never gave up the call of the stars.
As old hunters passed on, one championed the hunt as she had years ago. The other, now one of the oldest and most experienced, decided to lead once again. Not just himself this time, but all the wolves in his pack. To teach, to explore, to defend their territory. None objected. The pack flourished under their guidance. As the hunters before them, they began preparations for the next generation, no longer relying on the Stars or the Moon to grant new life.

His birth was anticipated. Heralded. Their whole lives within the pack had been preparing themselves and their home for the birth of a heir. A wolf who could do what they could not. One who would be granted with the fierceness of a Starborn but the power of the Sun. Pale Sage offered to the fading light, the celebrations lasted well into the night. The pack waited.

His father remained just long enough to meet him. Born of two Suntouched whispywhite Starborn, he was black as night. An omen. Able to capture all the Sun's warmth while mirroring the darkness. Surely this means he was favored by both the Sun and the Moon. He will bring the pack to greatness.

Always restless but eager to learn, his mother guided him through the the intricacies of survival and pack life. He excelled at the former, always seeming a little too rambunctious for social lessons. No matter, all in time.

I'm not ready for this
He was ready to lead the pack.
I can't possibly remember everything they've taught me
The training will serve him well.
I'm not going to live up to these expectations
The pack welcomed him excitedly.
I can't let them down
Head held high, he strode through the throng of hunters as they paid their respects.
I need to get away

Made the leaderboard on 22 Aug at 1298 stats! Tied with Garviel Loken.
Fun fact I was staying over at my parent's house and something in the toy room kept making noise and waking me up so at 3am I burned through a full energy bar and 2 guaranas trying to determine what and where the noise was coming from. Turns out it was a plastic wrecking ball toy so I ripped the batteries out and then realized he made it on the leaderboard
so yes. Yes indeed.
HE CAME IN LIKE A WREEEECKIIIING BAAAAALL
Tied at #9 with Manzana on 23 Aug at 1309
Tied at #8 with Vendetta on 25 Aug at 1320
Tied at #7 with Kahana on 27 Aug at 1345
Tied at #6 with Morning Glory on 04 Sep at 1415 Three-way tie for #5 between Advesperascit, Morning Glory, and Lapland's Melody at 1423
Up to #4 at 1509 on 16 Sep after the death of Gabre, RIP o7


Ah, so you have scrolled this far into my nerdery. I am keeping track of how much GC this boy cost me, just for fun. I don't mean to brag and I hope you don't take it as such. It doesn't matter at all, but I earned all of this GC in game, mostly through stud fees and selling food, amusement, and high-stat wolves. Then, I accumulated it by not spending GC on much of anything except a stud fee or a RMA here and there. I did not purchase any of Advesperascit's funds with IRL money. I am saying this so you know it is possible, and it to disparage anyone who chooses to buy GC. That is a totally valid way to play the game, and if you do I thank you for supporting wolvden! People who buy GC are the reason this site still exists!

GC spent:
Like 500 on his parents
236 on RMAs to get all "special" marks (combo or RMA only)
60 GC to further reroll red tamaskan and yellow inuit [probably should not have done that]
100 GC to further reroll honey inuit and silver elbow patch [BAD CHOICE SHIT]
84 GC to yeet the tuff marks [OH GOD WHAT HAVE I DONE]
340 GC for raffle mark or bust (spoiler it was a bust) including that GODDAMN SLOT 5 CREAM INUIT UNDERS that I removed AND THEN IT CAME BACK
DON'T RMA KIDS
19 to reroll the dupe white tamaskan into Brown Merle Patches?!?!?! IT TOOK 5 RMAS WHAAAAAT
60 on backgrounds and decor
375 on guarana

Battle information: only battles with the enemy ±5 are counted