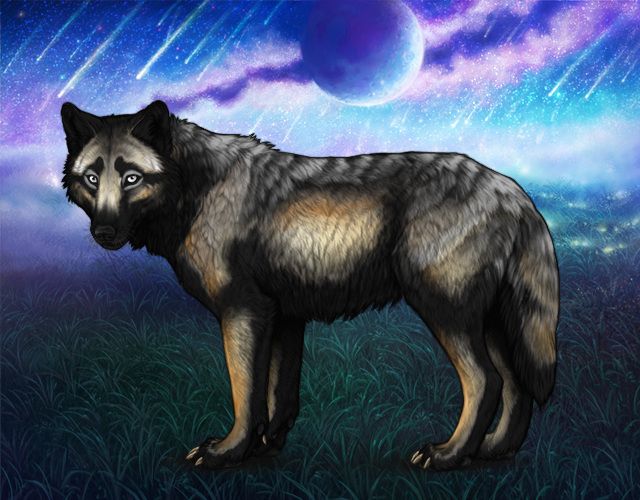 "Sir Riot, Alpha of the Crimson Fang Pack. Preceded by Diablo. Son of Pita and Scorpius."

Description: "Riot is a towering, broad-shouldered, muscular wolf. He seems to always be in a permanent, scorful snarl. He's a bit self-centered and snappy, and tends to admire himself a little too much. However, he has a soft spot for pups- and his mate, Bellatrix."

"Before becoming a part of the Crimson Fang Pack's legacy, Riot sought refuge with humans. He became a sensation- helping the humans with their hunts, guiding them to new locations, and even guarding their livestock. However, urban legends about his kind had drove the humans into madness- Myths that he would bring destruction into their precious lives. They then drove him out of their damned territory- with their banging sticks (guns) and fire stakes (torches).

Riot, who was once softened and tamed, sought revenge and absolute fury on the humans. The collars he wore only reminded him of the human's foolish ways- that they had marked him as their own. Coming back to his senses and wild instincts, he roamed the entirety of the forests, searching for migrating humans and taking over their hunting grounds- until all of them were under his name, and there were to be no humans in sight.

That is, until he came across a timid she-wolf, Bellatrix. She approached him without hesitation, and admired him. Alarmed, he snapped at her to back off, but she wouldn't budge. After a series of quite personal questions, she invited him to stay with her pack. Thinking about his plan, he refused. However, Riot felt amused by her- an emotion he hadn't felt other than pure hatred for a while. He allowed her to take him to meet the rest of the pack.

Diablo- who was Bellatrix's father and Alpha of the Crimson Fang Pack- was extremely wary of Riot. He had caught whiffs of humans throughout his territory- but it didn't turn out to be humans at all- it was this wolf. Thinking that Riot would lead humans into his territory, he thought about chasing him. However, his daughter persuaded him to let him stay.

After becoming adjusted to the pack, (and boasting at Mirage for a bit), Riot made himself at home. He slowly, but surely, gained the pack's trust and respect (and went head over paws for Bellatrix). He became a fine scout, and even impressed Diablo. Some of the wolves didn't agree with Diablo's decision on making him the next lead, but he fit right in.

Formerly thinking that his tags were something to be ashamed of, they remind him daily of how far he's come. He now (proudly) leads the Crimson Fang Pack."