Owned by 𝙵𝚊𝚗𝚐 𓃠
Bred by Unknown
View Previous Packs
This wolf has not rolled over today and will not be able to be traded or gifted until its next rollover. 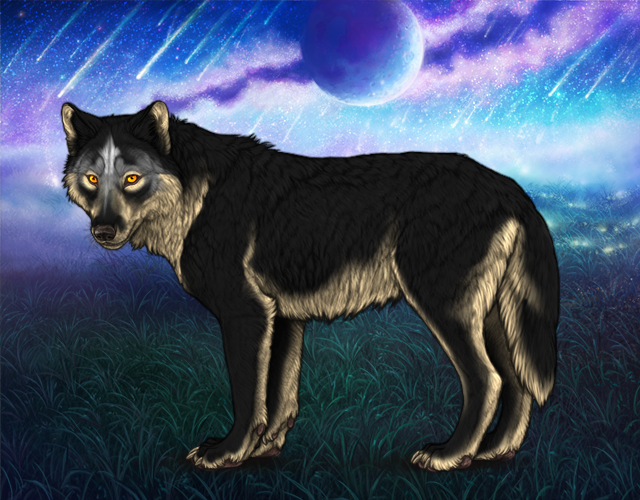 "Only the most savage will survive."
Adventurous, eager , reckless black young male wolf. He has small muscular shoulders and always accidentally snaps at other wolves or wanders into a bear cave. His Herbalist Sandstorm always has to keep him away from sniffing a strange bug on a leaf or swallowing a poisonous herb. He was once a domestic wolf kept in a zoo, but he broke free and made his own way into the wilderness. He had found a group of wolves, older and stronger than him, huddled at the base of an oak tree. The largest wolf, a melanistic black wolf had snapped his jaws at the young wolf as a warning to keep his distance, but a kind grey she - wolf named Dapplespots had stopped the black wolf. She had asked kindly, with her grey eyes twinkling, whether he wanted to join them. They were not a Pack yet, but a helpless, small group of wolves. Night, not yet named Savagestar had agreed. Days soon passed and the young wolf grew restless. He was afraid for the wolves' safety, so he had told Dapplespots one day, that someone had to step up and become Alpha. Midnightfang had laughed and told him that the obvious choice was himself. Dapplespots had shook her head, and angled her ears at Night, and spoke softly, " I think he should be the leader." Midnightfang's eyes had widened at that. Dapplespots had explained that the group of wolves needed a new Alpha, and that was him. He was young, adventurous and ready to lead. Pack blood runs through his veins. Night had been taken aback, but Dapplespots had told him that he was a young, strong wolf and displayed the qualities that a pack leader should have. Night had humbly accepted the offer, and he had straightened his body and had stood up straight. Midnightfang, after a few moments of grumbling, had accepted him. Night then decided to give himself and other wolves Warrior names, and they would follow the Warrior code. Ever since then, the young wolf had changed his domestic and soft personality into an adventurous and ferocious one. He had earned the respect of some of the older wolves in the Pack and has been leading proudly leading his Pack since then.