Owned by Varya
Bred by Ihmislehma
View Previous Packs
This pregnant wolf is not currently nested, and may risk losing puppies if she tries to give birth.
This wolf is pregnant! Her energy regeneration has slowed. She will give birth in 1 rollover! 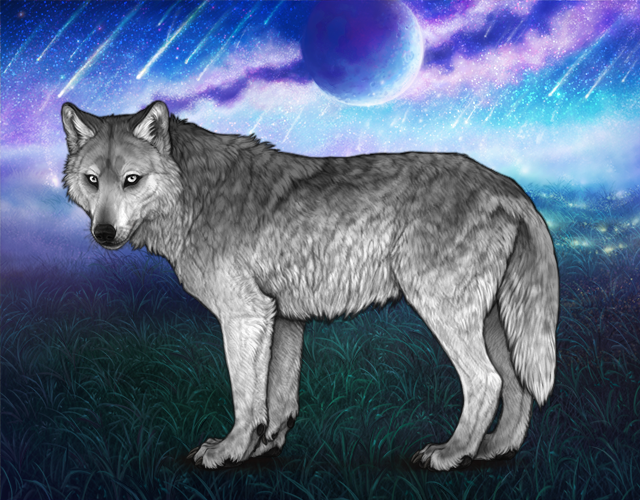 "Speckled Apple" narrowed her eyelids , her teeth twitched with unbearable longing . Her paws trembled and slid on the ground . The wolf howled as she saw the forest with spots disappear from her field of vision, covered with a veil . She collapsed in the snow . A pale snowstorm began to cover her body . Her thigh was bleeding, and a hoarse howl could be heard from afar . Red, bright slush colored the snowdrifts under it . The mountains seemed to have cracked . Balls of fine snow rolled down . Clods of snowdrifts flew into her nose, forcing her to jump to her feet . "Speckled Apple" saw maroon eyes flash in the snowdrifts . The old wolf was slowly moving towards her . Sill lowers her head below her shoulders . She didn't seem hostile . He looks indifferently at her wound and turns away to continue on his way . Snowflakes were falling on the back of her head . She sighed languidly and followed him with a cheerful gait on three paws . The snow was already chest-deep in snow . Their paws sank into the snow , and the forces of the "Speckled Apple" were rapidly leaving . She howled in frustration . The crackling of the mountains was repeated . Large boulders were falling on the mountain peaks . Sill poked her in the side, exposing his sharp fangs . His chest was shaking and ready to explode. He let out a sharp cry, starting to break through the layers of snow . She stumbles over her paws and follows him . They were running towards the pines . He was very angry with her . After all, what a fool it was necessary to be in the middle of the season of "Trembling Roots" to start howling all over the neighborhood . A gray wolf with a spotted skin stepped on his paw . With a pop, the "Speckled Apple" fell to the ground . A wolf with a snow-white skin turns around and calls her with a gullom . The tangle is about to cover the wolves . Sill looked back at the snowball and rushed to the pines with his tail high in the air . The "Speckled Apple" wriggled its paws in the snow, turning over on its stomach . She opens her eyes wide and sees how the block covers her . She can't see or hear anything , she can't even smell anything . She feels only the cold that has taken possession of her limbs . Gray Wolf opened her mouth to grab at least some air . But snow balls fall into her throat . She doesn't have enough oxygen . The "speckled apple" grabs the snow with its mouth. The weight of the snow cover presses on her back . She sighs helplessly, closing her pale eyelids . Rays of light began to break through the closed eyes . Her nostrils swallow the air . Sill diligently makes a passage to her . Her tail wants to wag , but the cold has frostbitten it .