How the story goes, this pack wasn't always called The Wilde-Blood's, it's had many names before its current one and the history is old, honoured and treasured. Around 4'000 years ago is where our history begins, when our sacred prey was much larger than they are now and we were three times the size as we are today. But our history doesn't begin with Grazers or our size, No it begins with Soras "The Avenger of Blind Justice" 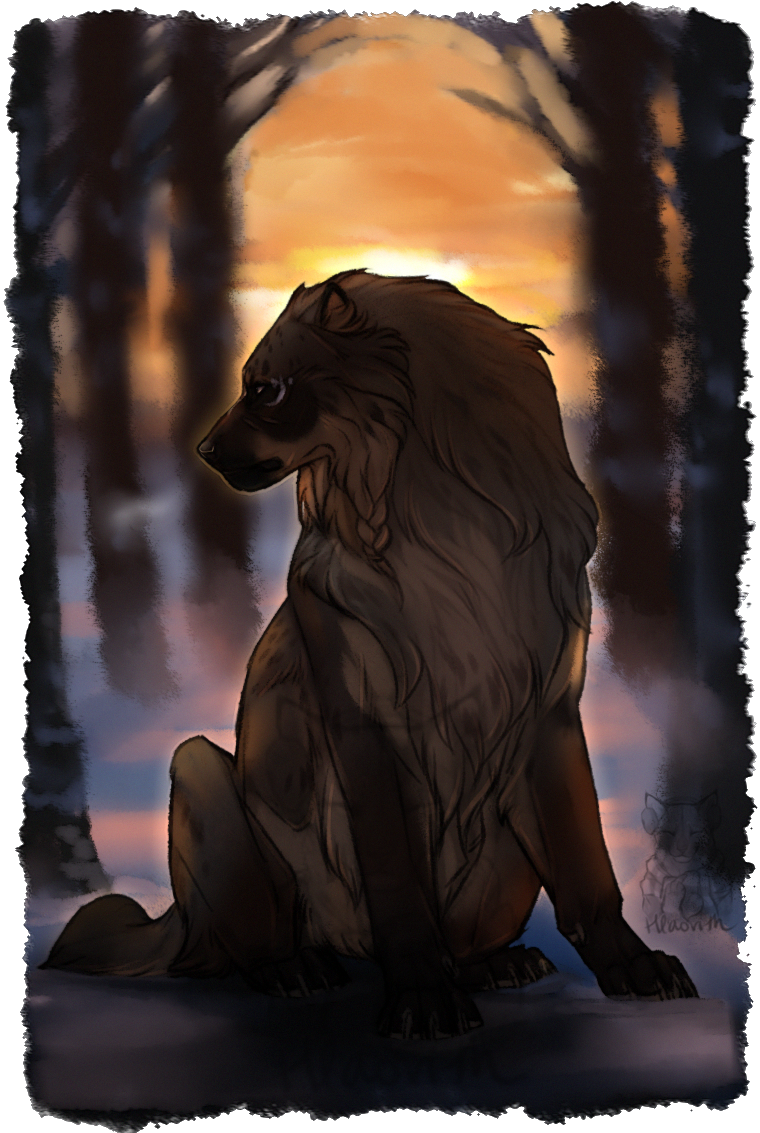 "Soras the Avenger of Blind Justice" Credit to artist Hlaorith

Before Soras had his grand title, he use to be a simple Shaman and for our Ancestors, Soras had no mate and led a simple life with his simple rank and task, he lived humbly following under his dear Alphas rule with a never wavering loyalty, until one morn. The fire star was just rising over the tree tops, the hunting party returned dragging their paws on the ground as they carried the Alpha on their backs liked they had been for 3 nights and 3 days, Soras immediately attended to the Alpha's wounds as his blood soaked the ground around them. Working through the night Soras swore he wouldn't fail his Alpha, but to no avail and with the Alpha's dying breath he pulled Soras close to whisper ever so softly and clearly "Great Grazer" the warmth of the Alpha's breath was the last sign of life from the Alpha before his spirit left his body to find another. With great sorrow Soras lifted his muzzle to the moon howling, the whole pack could hear the pain within his howl and knew their Alpha has passed. 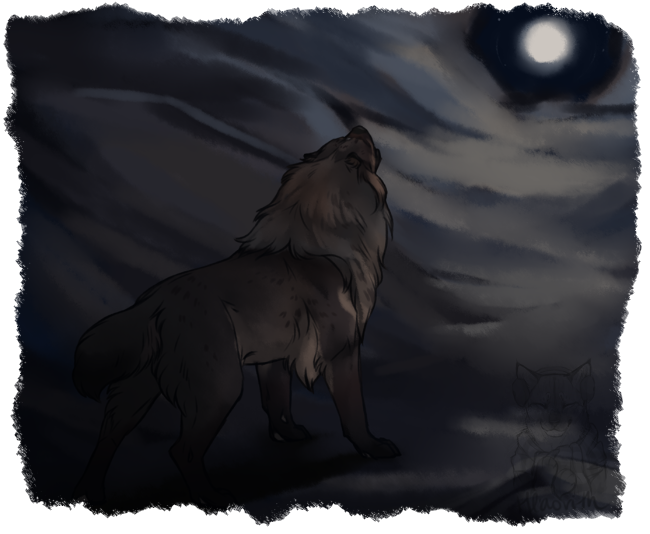 The hunters told the pack of their Alpha's passing and they then started preparations for the Sacred Trials where the Alpha's spirit would seek out and find a new Alpha who would lead them, packs from all over even from across the great salt lakes came to join the trials. With the arrival of so many packs and even more wolves and the burial of the Alpha in the hallowed grounds of the Grand Oak, Soras was grief stricken from failing his Alpha and breaking his word but he remembered what the Alpha's last words were "Great Grazer" and he knew what he had to do.

The Great Grazer was a very much like the Grazers of today are, only back then when they were larger the Great Grazer was easily double the size and impossible to face especially when standing between it and it's heard, so keep in mind it meant certain death for anywolf that went after this mighty creature. From what the hunters described Soras was far more then determined to avenge the Alpha, he left before the Sacred Trials began with no party to back him and no clue where he was going or so they thought. 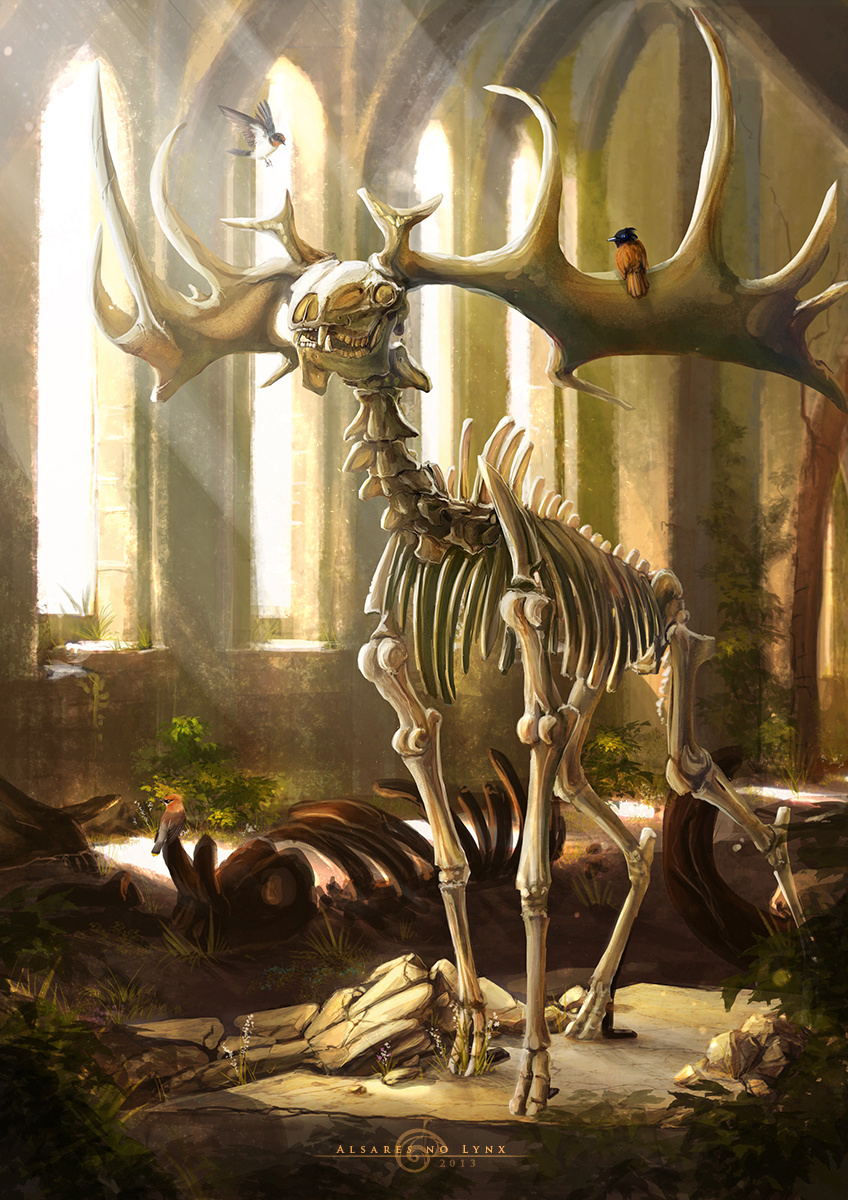 Seven days later and the Sacred Trials well in full swing, which normally lasted 14 days, the packs had almost completely forgotten about their grief stricken Shaman who set out on an impossible task to avenge their fallen Alpha. Through the cheering, wailing and howling from the many a wolf as they spectated the thrilling Trials, grunts with growling, panting and heavy thuds soon filled the air and the packs turned their attentions to the thick of the forest as Soras emerged drenched in seat, blood and foaming at the mouth as he struggled to the Grand Oak and dropped the head of the Great Grazer right on top of their fallen Alpha's burial site, the head was so big it is said that 4 Soras standing side by side would comfortably fit between one antler to the other and Soras just brought it home without help, water or food for many days and nights, right then and there the packs in union all bowed before him and he was named Soras "The Avenger of Blind Justice" and the future Alpha.

Many years later, Alpha Soras was a little older a little wiser and with a mate and kin, his life went from simple to completely full of life and he was unchallengeable as everywolf who thought of challenging him heard his tail and thought twice about confronting such a great wolf, that was until the Sawtooths of the Golden-Mane Clan threatened our packs and territory. 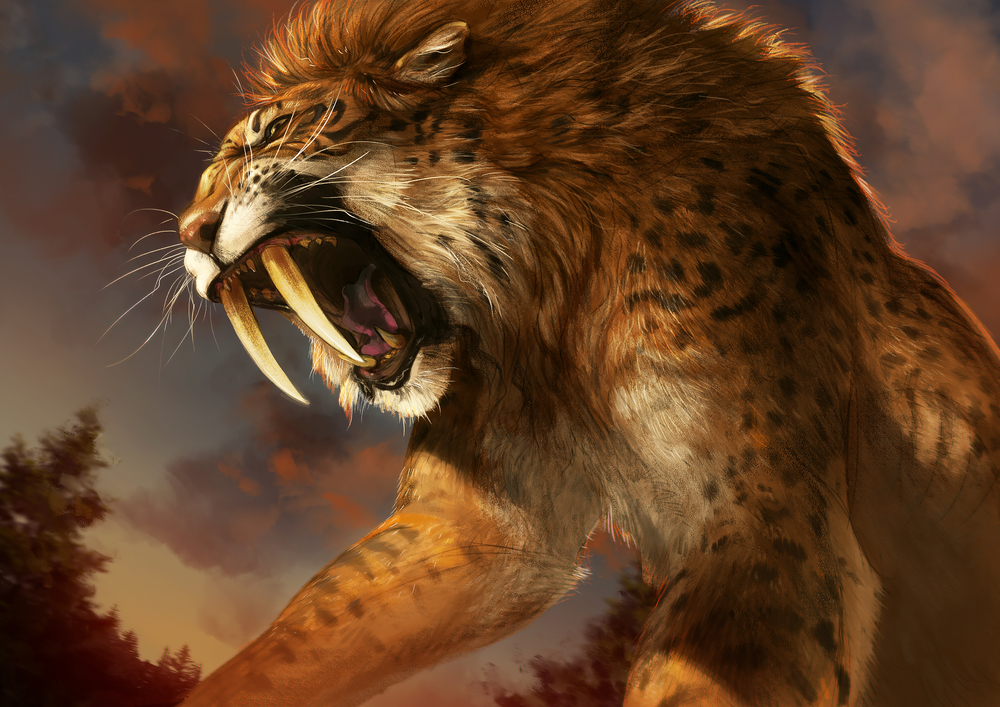 They came over the Great Mountains and from a territory covered by sand, they had slaughtered three of our packs and were sending quite the message that they were coming for the Alpha, his title, his territory, his family, his pack and they weren't afraid. Taking council from his mate in fearing for the life of his pack and kin he called to arms the packs of the North, South, East and West to back him in the War of our Ancestors against the Golden-Mane Sawtooths and the packs swiftly answered, travelling from across the land and the lakes, the packs bowed once more before Alpha Soras as he stood upon the Great Grazers, now pale white skull and antlers.

As our history tells us the War of the Ancestors was bloody, destructive and we would never forget nor the Sawtooths. The loss was great on both sides and the ground was drenched with our Ancestors blood and that of the Sawtooths, we might have won the war but lost our territory in the process, the red flowers had spread over all that was green and eating all that lived, stealing the spirits of the living, the territory was devastated. 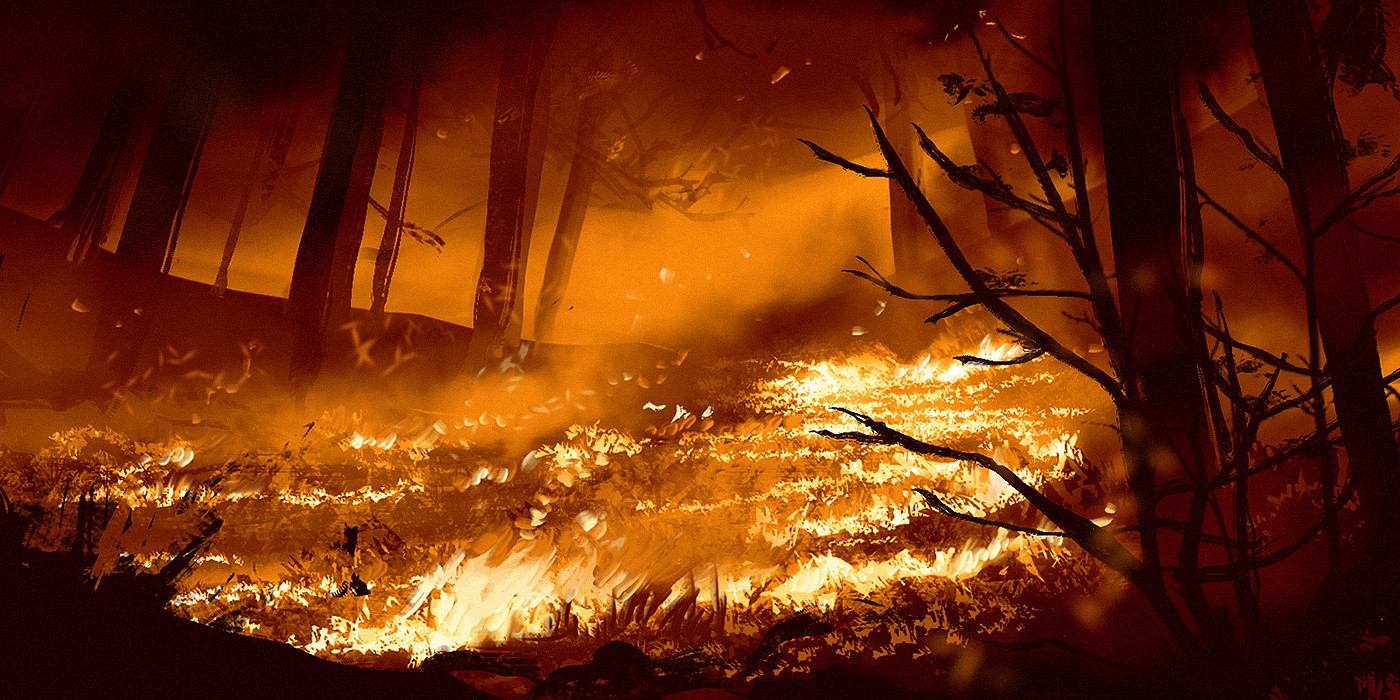 Alpha Soras had lead the packs to a safe haven above the valley now filled with the red flower, the last of the packs were safe and now looked to Alpha Soras for guidance, with tragedy sinking in his mind Soras started howling, calling out to his Ancestors and the All Mother to help in their time of need, and the answered.

The night stars started moving and fell to the ground only to rise as a huge Wolf and Grazer, they bore strange glowing red and blue markings around their eyes and down their bodies, everywolf was taken back at the sight of these cosmic beings. An old wise and blind Sharman wolf stepped forward and spoke softly "These guardians embody the black and white spirits, to be seen in their true forms is something no wolf has ever glimpsed while alive. This is a sight to behold" as the Sharman spoke the Guardians started killing the red flowers and breathing life into what was once living, the territory was restored to all its glory and our Ancestors had their home once more, Alpha Soras thanked the Cosmic Guardians offering himself as a sacrifice for what they had done, but his sacrifice was rejected and they breathed red flowers infused with green life upon him before returning to the night sky as the stars they once were. No wolf knew what that sign meant but they never questioned it and Alpha Soras stayed Alpha for many years until he fell, its said his spirit left his body and joined the stars in the night sky, joining the Cosmic Guardians. 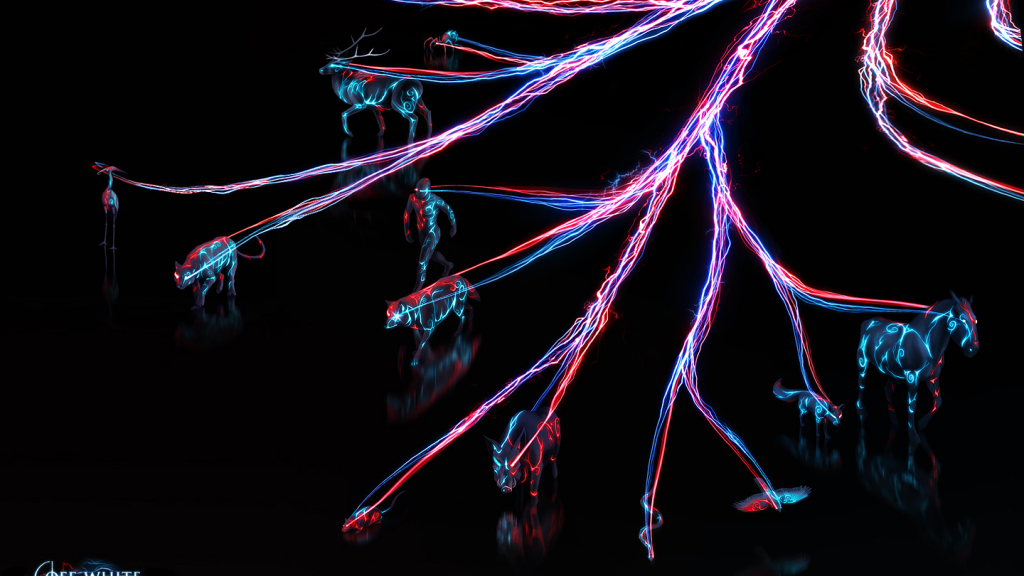 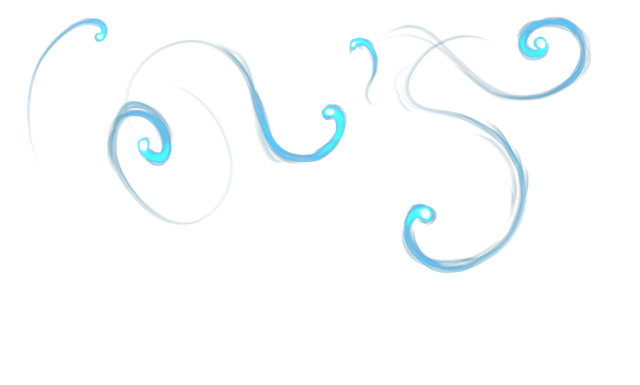 "Spores of Time" Credit to Wolvden

As the currents of time flowed and the years passed, Alpha's rose and fell but the bloodline of Soras "Avenger of Blind Justice" stayed as the strongest, most feared bloodline and their eldest kin were named Alpha when their Alpha's fell. Many centuries later and the Grazers are now smaller in size, the Grand Oak older in age and standing strong, the Descendants of Alpha Soras still in leadership now under the rule of the newly appointed Alpha

Alpha Cinder, Soras Descendent and Heiress to his Legacy